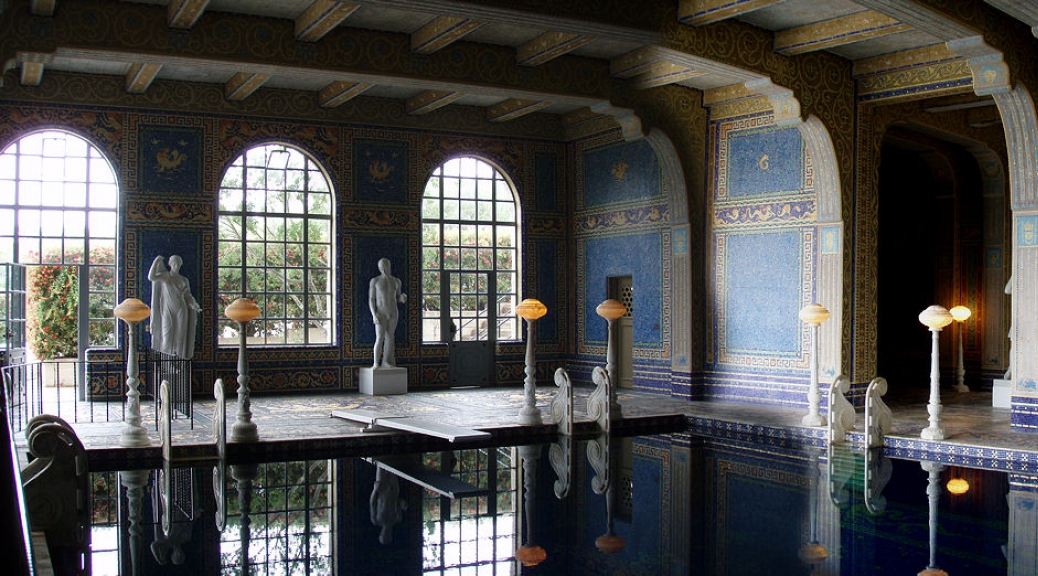 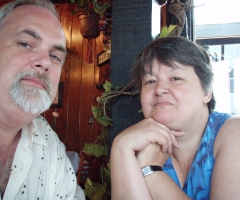 “Self portrait” in a Morro Bay restaurant! The restaurant had really lousy scallops. shiver But it was a nice to wander around the town. Very picturesque. 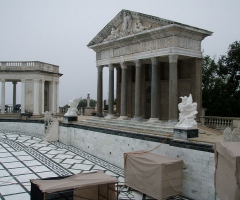 William Randolph Hearst built an astounding home in the hills above San Simeon. If you get to that area, you MUST go see it. You will be astonished. Unbelievable architecture, unbelievable artwork, unbelievable views. This is the outdoor swimming pool area, built in a classical style.

Here are some of the remarkable statues surrounding the pool. Hearst brought some home from his many tours of Europe, and others he had copied. Note the foggy weather! 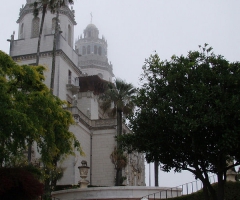 The Casa Grande, the main entry to Hearst Castle. A Spanish style dominates the main house. Very impressive. Note the lions – he had that lion reproduced over and over and can be seen in literally hundreds of locations around the grounds.

The main meeting room. From here Hearst managed his hundreds of companies, and met with the most powerful men of his time. About the only disappointment in his life was failing to become president. 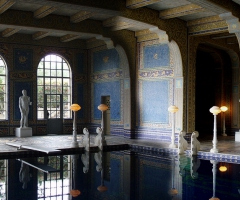 The indoor pool. The gold color, is indeed gold. An extremely decadent pool. It is truly gorgeous – too bad it merely sits there day after day and not used, like it was meant to be. 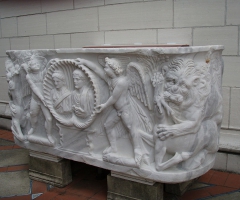 This a sarcophagus that Hearst bought in Europe and had shipped home to decorate his gardens. Unfortunately it was a fake! Even experts get fooled. 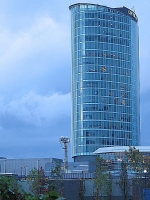 We live in Surrey now, just across the river from Vancouver. It’s about a 45 minute drive to our old place. This picture is the tower that is part of one of the largest shopping centers in Surrey.

It’s called Central City and it is being positioned as the “downtown” of Surrey. The Sky train has a stop there, and transit has a big loop there. Diane Watts, our current mayor is trying to get a city hall built in this area too. Currently, City hall is on a hilltop in south Surrey, in a mostly rural setting. This would be a better, more dynamic area for City Hall.

There are several other residential towers being built in the neighbourhood and that will change the nature of the area, too. It’s going to get alot busier over those bridges! There are 3 huge apartment towers, one completed already. The Skytrain really spurs development all along it’s stops.

We’re about a 10-15 drive from this area of town. We’re further south. We’re hoping the Skytrain might come down the King George Highway right to White Rock. That would be terrific. 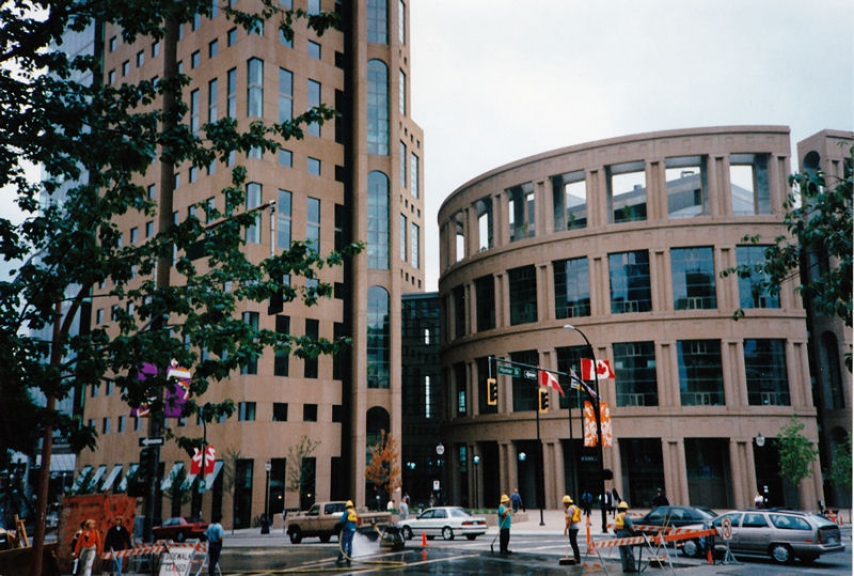 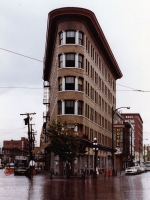 Vancouver is a relatively young city, but it has a wide range of beautiful and odd architectural points of interest. Here are some that are interesting and fun.

This triangular shaped building seems more like something you would see in Europe, rather than North America, but there it is right in downtown Vancouver! 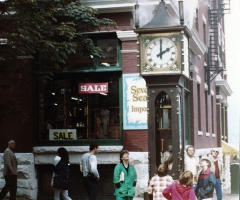 One of the earliest parts of Vancouver is Gastown. Cobblestoned streets, funky shops, antique stores, sidewalk cafés and a friendly bustling atmosphere welcome the Vancouver tourist. It is within walking distance of the Cruise Ship Terminal; the Seabus and SkyTrain Terminals are even closer.

Gastown probably got its name from an early settler named Gassy Jack, but one doesn’t want to delve too deeply into why he was named gassy, I wouldn’t think! 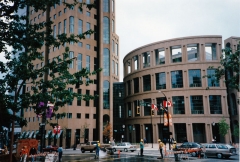 This structure is the new main branch of the Public Library System. The Classically inspired design is softened somewhat by the rectangular placement of an office tower. Some people were uncomfortable with the design being inspired by the Coliseum in Rome. 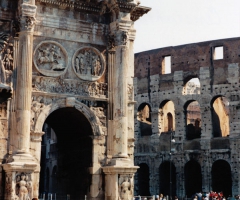 This  picture is of Constantine’s Arch near the Coliseum in Rome, a picture taken during our tour of Greece and Italy with Karen. It does look similar to the new library, don’t you think? 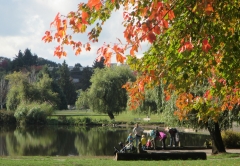 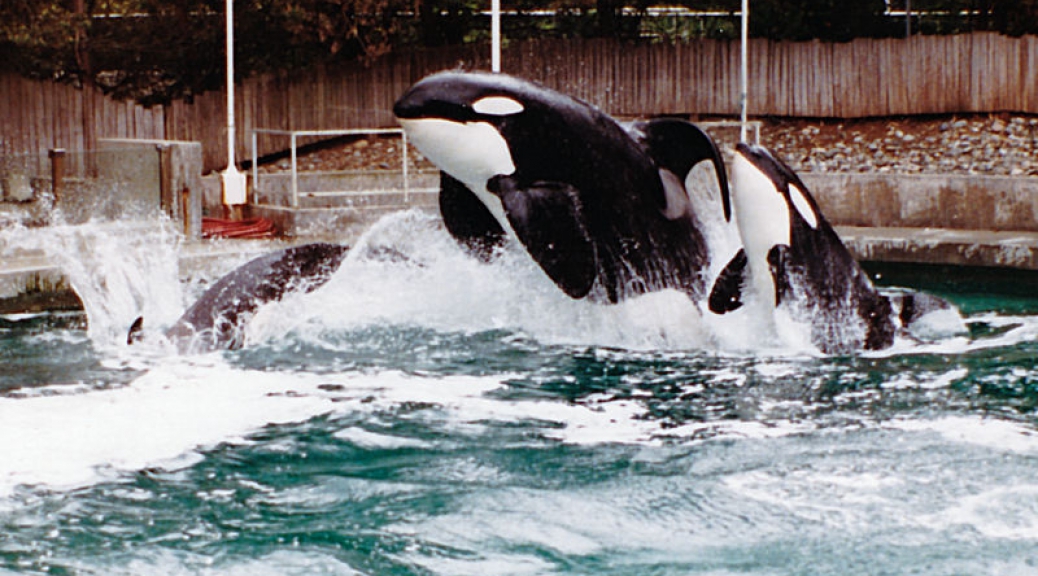 Greater Vancouver has about 1.6 million people. But “Greater Vancouver” includes a number of smaller municipalities including Burnaby (home of Metrotown the ultimate shopping center) Richmond (near the airport) and New Westminster and Surrey (on the river to the south of downtown Vancouver). 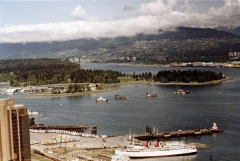 This picture was taken during our first trip to Vancouver, in early 1985. This harbor is now dominated by the Sails of the Convention Centre, but I put this older picture up to remind us of what we may have lost.

While we are blessed with great natural beauty all around us, our presence serves only to drive it further away. Stanley Park is visible in the picture quite clearly on the mid-left of the picture. It is a large inner city park within the boundaries of the city. It welcomes the sea traveler to the city, forming the southern tip of the harbor entrance.

The North Shore Mountains are covered by clouds in the picture’s background, which is not an infrequent occurrence in the winter. They get lots of rain over there! 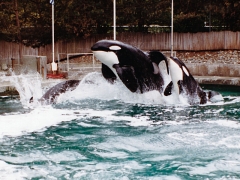 And right in Stanley Park, the Vancouver Aquarium is home to many forms of marine life. Although the whale shows have been curtailed because the politically correct have convinced everyone that they are cruel, we’ve included a picture of them anyway! I think we’ve only been back to the aquarium once since they’ve stopped the shows. I think we could have made a marvelous enclosure for them, but instead we sent them away to die.

(This post was actually from an older HTML based website I created back in the early days. Pam and I have had an on-line presence since 1985. We ran a multi-line bbs for years, and have had over fifty different websites!) 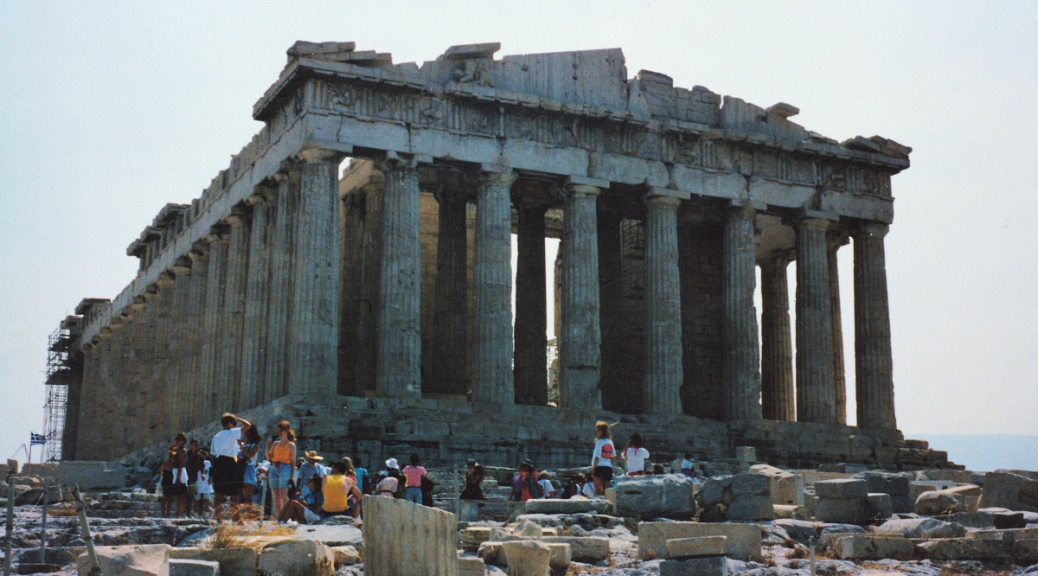 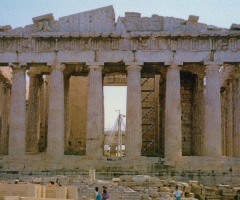 Trying to remember what happened in August of 1990 is not easy for me. I remember fleeting details. I do not remember the flights to Europe or into Athens at all. Not even a minute of it. The flight home is another matter of course, and we’ll talk at length about that when the time comes.

I remember breakfast in our hotel, basically in the shadow of the Parthenon really. We were all eager to get out there and explore! Walking up the Acropolis was intensely hot. The temperature was close to 100 degrees, and we simply had no experience with that. We hurried to the meager shade the olive trees provided as we made our way up the winding path. We pretended to eavesdrop on the various guides just to catch our breath and cool down.

Once we reached the summit, we couldn’t catch our breath for entirely different reasons. I’ve never seen anything like it. It still resonates all these thousands of years later. The Parthenon is an exquisite work of art, a magnificent symbol of freedom. The lines are wonderful, flowing, graceful. You long to see the friezes, wonder at their intensity. 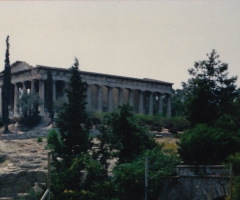 Wandering around the summit you are treated to amazing views out over the city of Athens  – over there is the Temple of Olympian Zeus, barely a few columns left as a testament to its glory. Look the other way and see the Temple of Hephaestus, a kind of “Tiny Temple” version of the Parthenon. Turn once more and see the Areopagus, where murder charges were brought and discussed.

It’s simply dizzying. Look another way, and see the jail where Socrates was held, entertained his friends and ultimately died in the most tragic failure any democracy has made. The Plaka is just over this edge, a bustling market of nearly anything you can imagine. 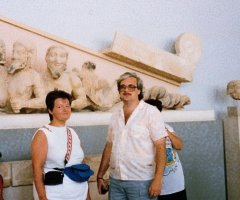 The museum at the “back” (really the front) of the Parthenon was just opening when we arrived and all the exhibits were not in place. It was still pretty fascinating. I have had a fascination with Ancient Greek culture ever since I saw the Elgin Marbles in London England when I was 12. It was truly a seminal event in developing one of my lifelong interests.

I think God will have prepared everything for our perfect happiness. If it takes my dog being there [in Heaven], I believe he’ll be there.