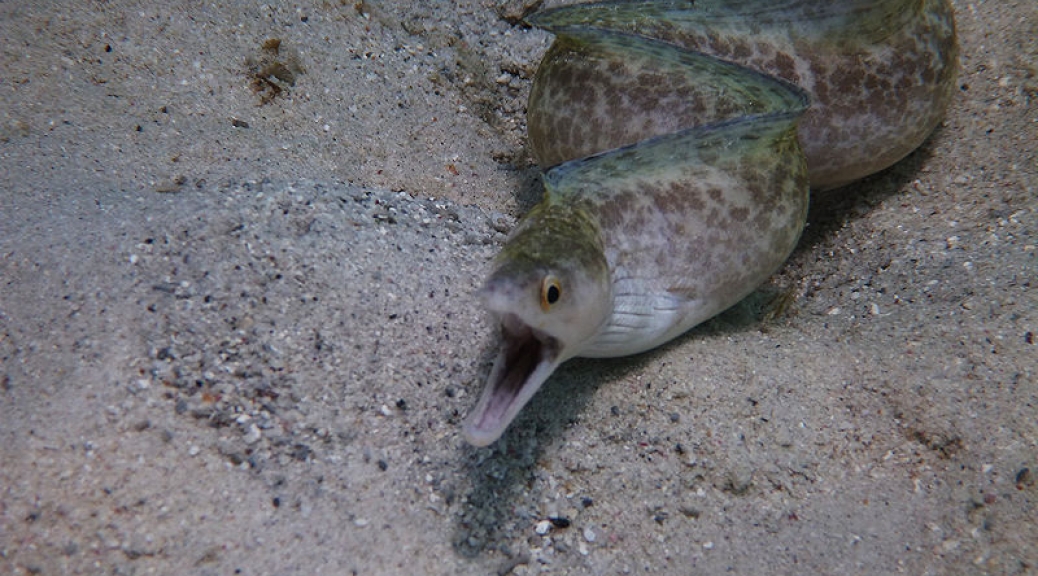 (We’re back home and I have access to a computer that can process our pictures and videos so we’ll start posting over the next few days.) 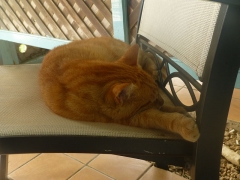 While reading and having our morning coffee we were joined on the sunporch by the local cat. I think he preferred to sleep on our chairs because we used e-readers, while the people next door were making all sorts of noise by turning their pages. Disturbed his sleep don’t you know? 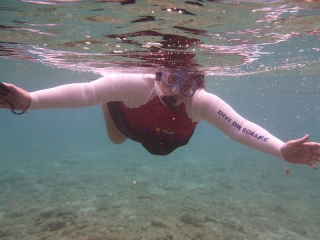 We decided to just swim out front of our place today and we saw some fun things. Pam got a bit of a sunburn, something she very rarely does. So we got her a rash guard and now she’s a convert.

We managed to get a couple of cool shots of a purple mouth moray that I thought deserved two different looks. He was a busy little guy, darting across the sand and along the coral like he had somewhere to go. 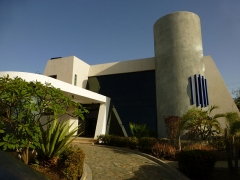 We took a nice drive around the island and I saw what I thought was a pretty darn cool house. Not your typical Caribbean home, that’s for sure. 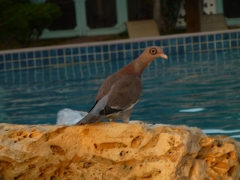 Does this bird look like he’s about to jump in the pool? And he’s glancing nervously around to see if security will see that he is not a registered guest and toss him out. Thought it was a pretty fun shot! 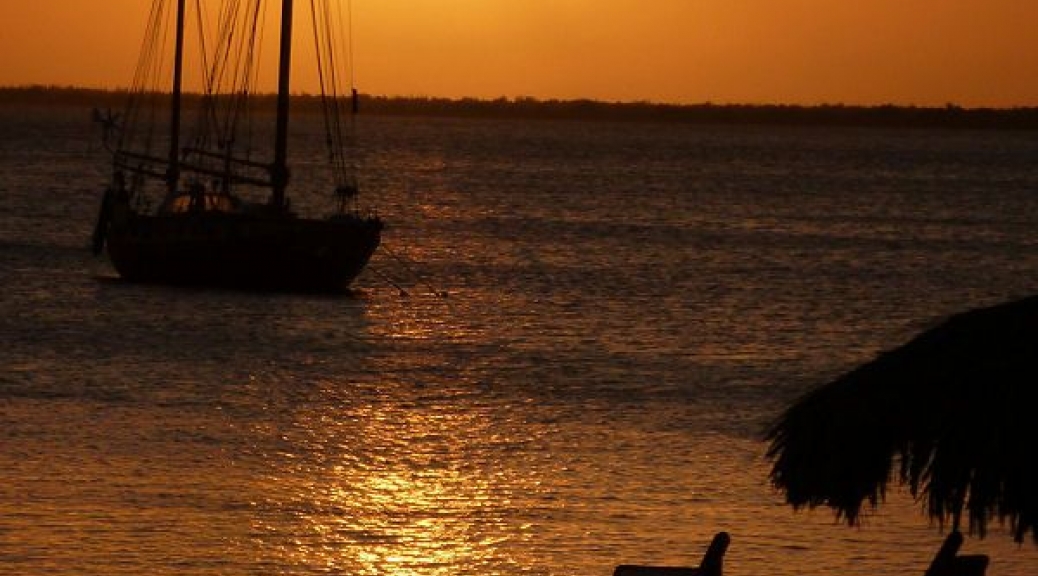 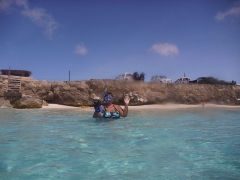 Bachelor’s Beach is south of the airport, right off the main road. The beachs are nicely marked with yellow painted rocks, and each entry to the ocean has a unique name. Every beach we’ve been to, has about twenty divers! The diving is phenomenal here, with every dive easily gotten to by simply entering the ocean – rather than needing a boat, like a lot of dive sites. Bachelor Beach has a unique entry – a set of stairs to nowhere! The divers on the cliff above Pam are in the vehicle next to ours – the little white Jimny (no that’s not a misspelling – it really is called a JimNy.) 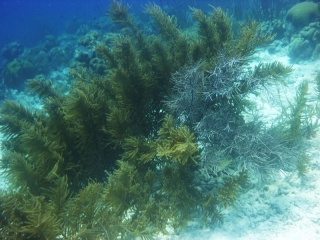 The coral was lush and magnificent, again, like all of Bonaire. The variety of fish was good, with tons to see. The most remarkable thing we saw was a “cloud” of margates. Now, we’ve seen margates before, one or possibly two together. But this was a mass of margates, literally hundreds of them moving over the reef. We saw this mass of fish, and I looked at Pam and said, “Are those margates??” Very cool sight. 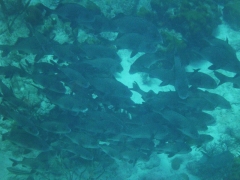 This movie was taken by Pam, and the margates were down at about forty feet or so, so that’s why it seems so dark. When the margates “scatter” it’s because I’ve dived down to get a better close up shot. (Not very successfully mind you!) I’ve put another movie Pam took just below it of the margate’s usual behaviour – hiding in his little cave, all by himself, ultra-shy and wary of divers. 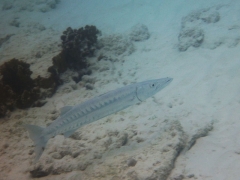 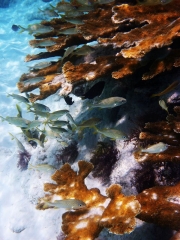 There were lots of barracuda of course. Each time in, we’ve seen four or five of them. One time, we saw one barracuda actually chase another barracuda off – and man, they can move big time! Usually they move very slowly, not disturbing the water – but when they want to go, wow… 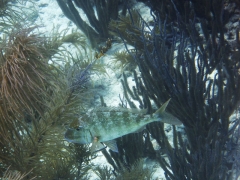 Pam took a movie shown here of a bonefish. They are very shy fish, and very tough to get in the picture! They are very silvery, and shiny, and play in the very shallow waters, where the sun gleaming on their skin makes it tough to see them in the viewfinder of the camera. We have a whole ton of shots of half the fish! OR they are out of focus because the camera simply can’t differentiate them from the brilliant white sand. It takes a second for her to get one, but it’s pretty darn cool. 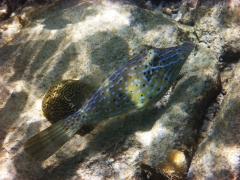 The scrawled filefish is a big guy, about two feet or so, and we saw one as soon as we got in, and later on under a wharf. They are really cool in the ocean, changing color from white, to green, to brown to blue. They swim very lazily, and let divers get quite close to them before moving off. 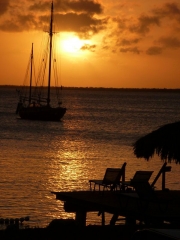 This is a sunset picture right outside our room. That little dock there with the chairs on it is where we jump in the ocean for our late afternoon swim around the ocean. Pam’s been known to lie in the sun waiting for me to get back. 🙂

Have I mentioned how phenomenal the internet connection is here? WOW – I’m totally impressed. For an island that only has a population of fourteen thousand, I never dreamed they’d have this kind of highspeed connection. It’s even faster than my at home cable internet, and I’ve never lost connection even once. One of the reasons we’ve been able to put more movies in the posts is that the connection is so quick and reliable. Really great stuff. 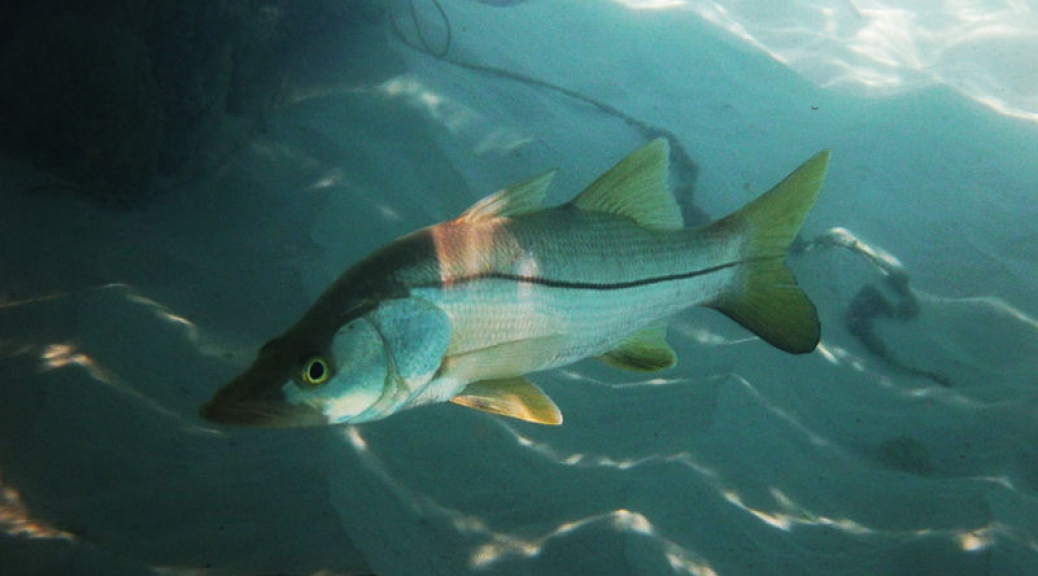 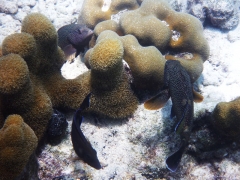 Tuesday we headed to Buddy’s Dive site. It’s the place that was so nice to us the first night here so we figured we’d check out the water. The entry was super easy via a set of metal stairs right into some nice warm water. The coral close to shore was a little beat up, but out near the drop off it was as spectacular as ever. 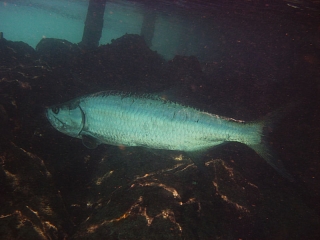 The site was infested with very large fish. We saw a number of tarpons, easily six feet or more. One was just lazily hanging around under a dock, surrounded by rather large snappers. But he simply dwarfed them… I’ve got a brief movie of him here, but it really doesn’t show just how large it was. 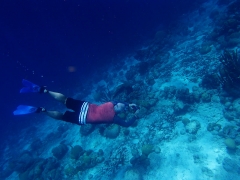 He was pretty lazy, just casually drifting along. If we approached really closely, he slowly moved off. But never hurried like some of the other fish do when you get too close.

There were some large barracuda too, one guy just hanging around under a boat! If I approached him, he just moved to the other side of the boat. Quite a shy guy. 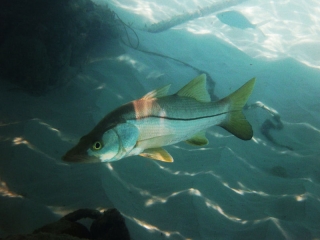 Under another dock we found a couple of large snooks. This is only the second time we’ve ever seen a snook, so it was pretty cool. They are a strange looking fish, with a sloping forehead and what looks like a large vein running down their center. He was a good size, well over three feet. 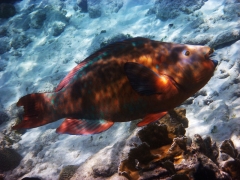 We saw another large rainbow parrotfish, but not quite as large as the ones we saw at Black Durgon beach, but still a fairly large fish. In the movie I’ve put here, you can see another parrotfish quite close to him, and that fish is fourteen to sixteen inches, so that will give you some idea of how large the rainbow is. 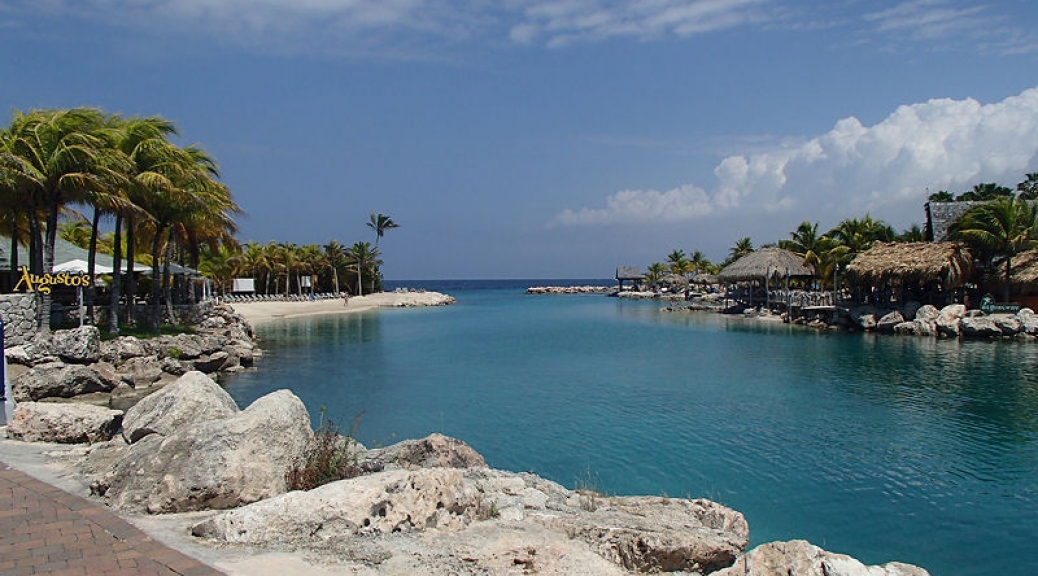 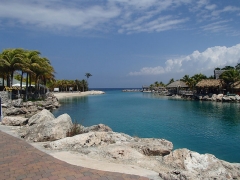 Well, we’re on the move again. Pam and I left Vancouver on Friday, and flew to Chicago. It was on an Airbus, a great plane, that’d I take over just about any Boeing. The seats are wider, there is more leg room, and the flight crew was really terrific. The flight was uneventful, but landing in Chicago we discovered rain and fog had delayed our connecting flight to New Jersey’s Newark Airport.

Chicago’s airport, at least the United terminal, is a tired worn out old boat. There are simply not enough seats for people waiting for their flights, and the place look really drab. However, we each got a great salad from a restaurant called Mediterranean Tampenade. Nice fresh food, terrific fresh crab, tasty chicken salad – really nice food. Could be the best airport food we’ve ever had.

The delay in Chicago wasn’t a big deal, but we got stuck in a little Boeing plane, with narrow seats, no legroom and because the flight was jammed, no place to put our carry on but under our seat. Luckily it’s a short flight, and we managed to make it quite quickly, in well under two hours. 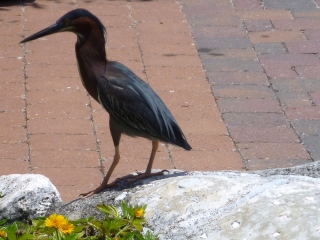 Newark is a nicer airport, roomy with comfortable seats, but it does not have free wifi, and no way will I pay eight bucks for the couple of hours we were there. Our flight into Bonaire was delayed for over an hour. Then we boarded the plane, and two people who had checked baggage did not board the plane, so there was a further delay waiting for their luggage to be removed. We left one hour and forty five minutes late, arriving in Bonaire just 20 minutes before our flight was scheduled to leave for Curacao. Which meant we’d miss it, since we had to pick up our baggage and go through security again! sigh…

So while I tried to find our baggage, Pam went to the DAE checkin and got them to hold the plane until we came. They told us we had to come now, or miss it – so we left our luggage in Bonaire, but DAE told us they’d send it on to Curacao. So here I am in Curacao without luggage again!

We tried a new way to get a rental car – a process complicated by the fact they aren’t allowed on the airport grounds to disperse cars or pick up clients. It went surprisingly well, and we saved over 100 bucks for the rental. It’s a nice enough car, complete with all insurances. Our luggage showed up at 11:30 am, so we were able to grab it from the airport. Ah well… the joys of travel!

While walking back from parking our car at the Royal Sea Aquarium, we saw a smaller spotted eagle ray, right from the bridge! Have only seen one of those before, and that really briefly with Mike. 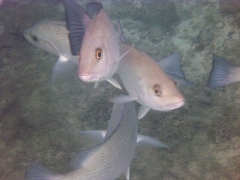 So even though we were pretty tired we went and got our suits on and jumped in! We just puddled around, enjoying being back in the ocean, with all our scaly friends. First day pictures are rather poor, so not much to show you. I will say though that the breakwater has really developed! Just tons of interesting things to see and lots of coral growth. It’s definitely looking good! 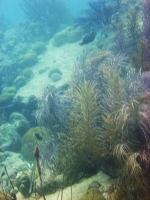 I’ve included a brief movie of the eagle ray – give it a few seconds and he approaches very closely to where we’re standing. We didn’t see him when we got into the water, but one of the staff here said that the ray has become a resident here, so we’re hoping to catch him in the water on another swim.

Oh – our room is pretty terrific – it’s on the third floor and looks right out over the dolphin pool! We’ll have a picture or two of that over the next few days I’m sure!

(I’m posting this and heading to bed – so if the movie is not there – patience, as I was going to bed, it said there was 10 more minutes to go…)