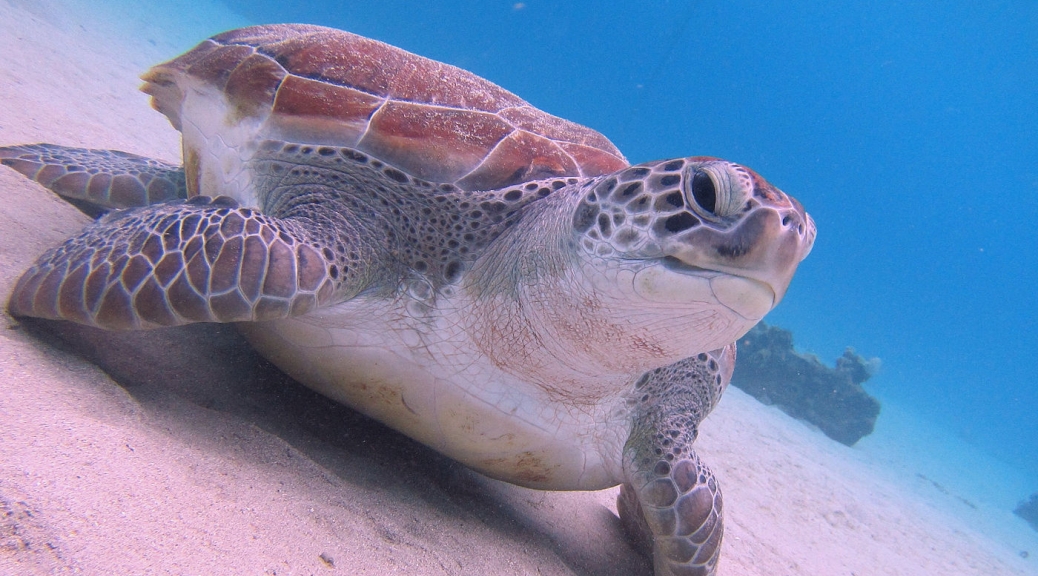 We headed up to Westpunt to check out the turtles in Playa Piskado. It’s always a great favorite of ours, and most of the island as well! It can get crowded out there. There are so many turtles in the bay, and everyone loves to snorkel with turtles.

There were literally dozens of turtles today. Usually we can count fifteen or sixteen, but today – wow! Again, usually the fisherman come into the dock and offload their catch, while gutting and filleting the fish. But today, this boat stayed out in the deeper water, and I’m not sure if that attracted more turtles or what. But what a show they put on! 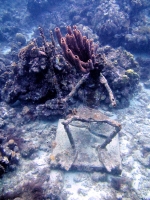 There are lots of things to see in this bay besides the turtles, but you wouldn’t know it by the pictures we take. I took about one hundred pictures, and ninety are of turtles! haha They certainly catch your attention. The one picture I always have to take is of old King Neptune. He’s in fairly deep water out near the drop off. 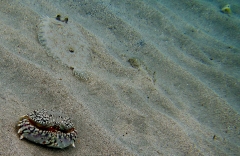 One other thing we saw that is quite cute. There are a lot of these little crabs wandering around the bay, and they seem to pick up a buddy. We often see flounders bumping into the crabs. We’re guessing the crab stirs up the sand and some micro food, which the little flounder gobbles up. It’s really quite cute. 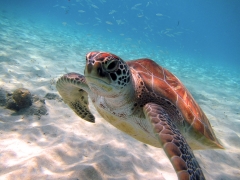 Wow – I didn’t realize how long it has been since we’ve posted on the blog. I got a reminder from GoDaddy, our hosting service, that they automatically renewed our hosting and realized, oh right! We have a blog! 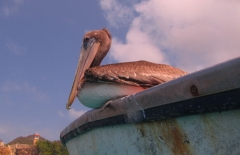 We’ve been doing not much of anything really. Just being retired. We’ve been in the ocean of course, and been out to restaurants, and had some fun evenings in one of the casinos here. But really, we’ve just been enjoying being in nice warm weather and not worrying about rain and snow and cold.

I’ve been doing a lot of golfing here on the Blue Bay golf course. It’s a challenging 18 hole course. The trade winds really make club selection so important. One hundred and twenty yards into the wind is a 6 iron, but 120 yards with the wind is an 9 iron. There are some great holes. This picture is approaching the green on the 14th hole.

We went out to Playa Piskado (or Playa Grande as it is sometimes called) with a nice couple we met from Delaware, and had a fun swim with the turtles. It’s always a great way to show off the ocean around Curacao. There were tons of turtles of course, but we saw a couple of Queen triggerfish! All the years we’ve come here, we’ve never seen a single queen triggerfish – we see them in Bonaire and Aruba a lot. So it was neat to finally see one here.

Will try to get more regular about posting. Bailey is doing great, btw! 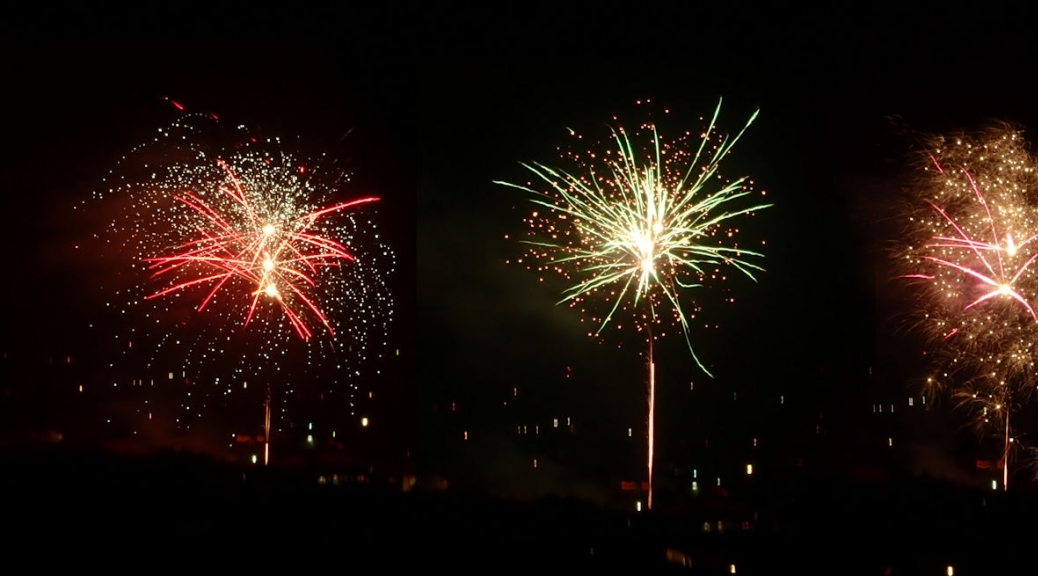 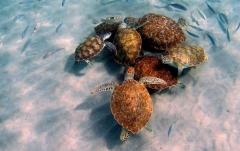 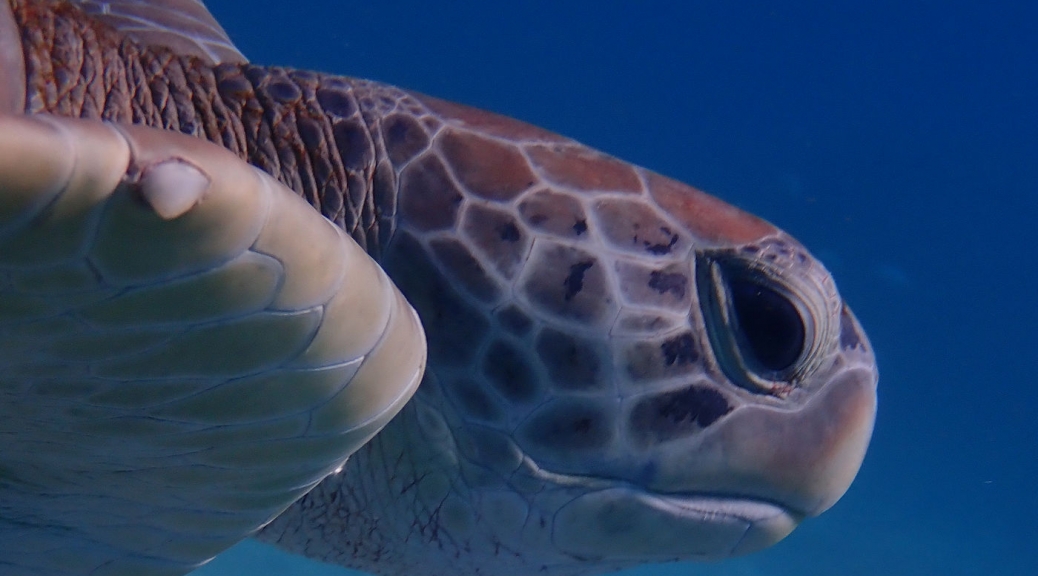 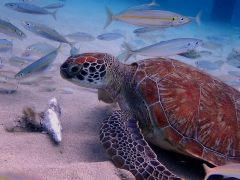 This bay is one of our favorite places to snorkel. It’s known as Playa Piskado, although the sign at the entrance calls it Playa Grandi. Piskado is a Papiamentu word that means fisherman. Several times a day, the fisherman come to the dock and clean their catch. The remains are tossed into the ocean, and lots of turtles come and get a free dinner. The place is usually quite busy with lots of snorkelers looking to catch these graceful creatures having dinner.

The bay is quite well protected, so the ocean is usually quite calm. Even though it’s a major turtle spotting beach, there are plenty of other fish to see. We say a rather ginormous lobster hiding under a shelf, like usual. And there were loads of other fish, of course. The butter hamlet is one that Pam likes quite a bit. We managed to get a pretty decent shot of one today. 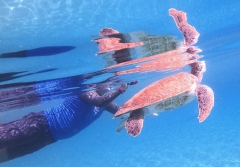 This is a video of one of the larger turtles coming up for air. We usually miss getting them in the frame, so I’ve included it in this post just to show we can get lucky! 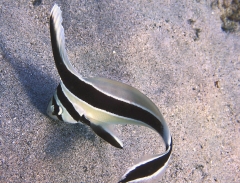 This fish on the right is also a neat looking guy. They normally do not like to be photographed and quickly hide themselves. But today, there were quite a few of them over near the side wall away from the turtles, and they didn’t run and hide. It’s called a jackknife fish, and looks pretty lovely.

We had brunch at a restaurant called Kome, a Papiamentu word meaning “Eat.” It’s in the downtown area called Pietermaai, close to the famous Curacao sign. It was simply wonderful. Loved the layout of the restaurant with an open kitchen and local artwork on the walls. The staff were really terrific, and the food even better. The restaurant owners stopped by our table a couple of times throughout the meal to make sure we were enjoying the place. We will definitely be coming back for dinner. The only thing is, Bill Murray kept staring at us through the whole meal! 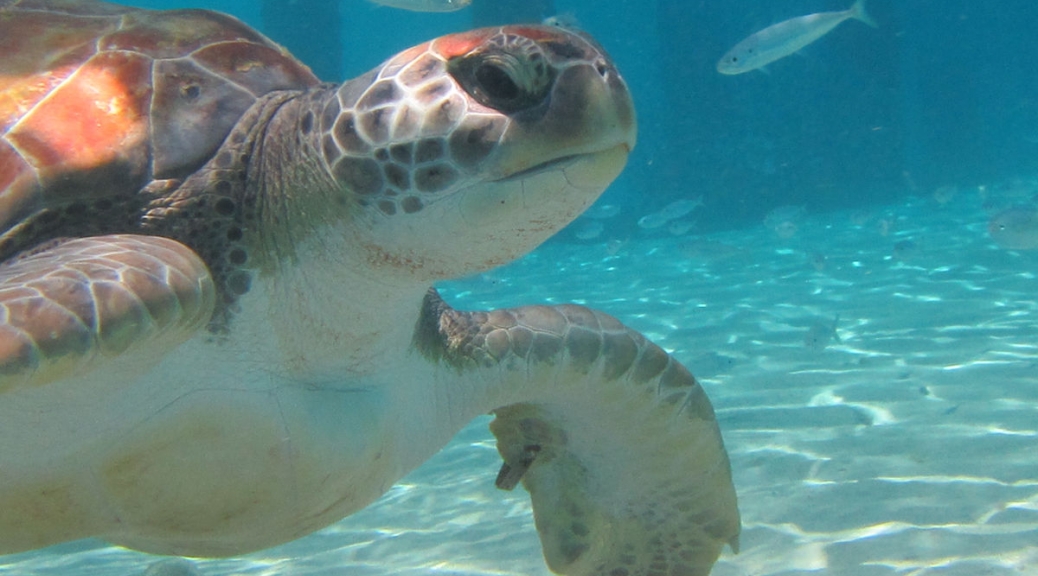 We are having lots of fun on the island, getting used to how things work here. Laid back is definitely an attitude, as well as a way of life. Still, things can happen very quickly too. We bought an all-in-one washer/dryer, and they had it delivered in about two hours! Installation was complete the next day. Is that unusual? Well, the next day at our beach bar, someone came up to me and said, “I heard you got your washer/dryer installed already!” So there you go – not only was it exceptional, it was the talk of the island! haha

The snorkeling has been quite amazing. Some days the water is so glassy calm, it’s like laying on a bed. Yesterday, was a bit rougher, and visibility was a bit murky, but still quite clear. I’ve uploaded a movie about turtles at Playa Grandi to YouTube. It was compiled with a new app called ShotCut… it’s a Windows Movie Maker alternative, since Microsoft decided to drop Movie Maker from Windows 10. Not bad for a first stab I think – it’s four clips in the one movie.

The apartment building we are in is going to be having fibre optic cable installed for internet, but there is a slight delay because the conduit for the cabling is too small! They had hoped to have it ready for August, but it will be delayed a bit while new conduit is installed. it’s a big job, but they think it will be ready in just a couple months. So, we have to take our computers to the beach for wifi access. So, I’m not doing long blog posts, but short twitter updates. You can access my twitter feed at https://twitter.com/CuracaoCanuck

We looked at a couple of new beaches to go to, but the lure of the turtles at Playa Grandi was too much. Our previous trip END_OF_DOCUMENT_TOKEN_TO_BE_REPLACED

We headed to Westpunt, on the far opposite side of the island from our hotel, again today. We weren’t sure END_OF_DOCUMENT_TOKEN_TO_BE_REPLACED

The bond with a true dog is as lasting as the ties of this earth will ever be.