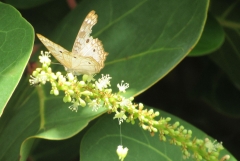 We’ve been taking it pretty easy here. Not much is new, we have a pretty slow paced life. Golfing once or twice a week. A dip in the ocean once in a while. A big day out is getting gas for the car and shopping for groceries. Thought this picture of a butterfly was very pretty, and worth sharing.

We rarely get out to a restaurant anymore. We do go to our resort’s beach side happy hour on Friday, so long as they are featuring live music. We skip those days that have a DJ. They don’t play many songs for our age bracket! 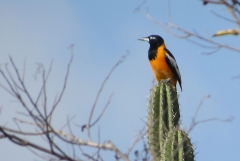 The trupial is a very colorful bird, with a distinctive song. We see them everywhere on the island, sometimes just sitting on a cactus. They also like to hang around the golf course’s restaurant hoping for a handout. The featured image on this post has one that I thought made him look angry. Pretty funny don’t you think? 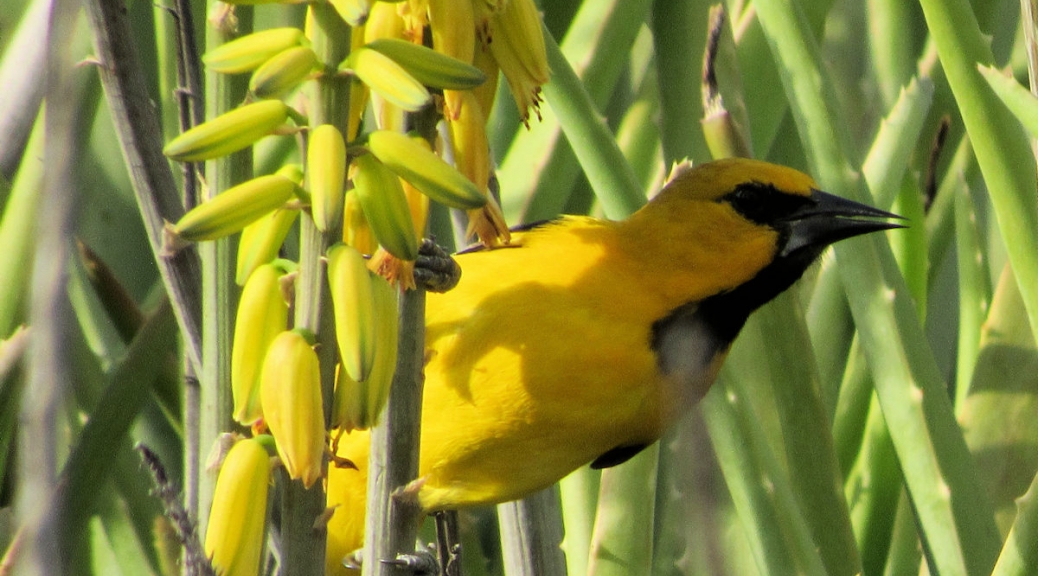 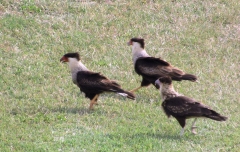 There are lots of birds here on Curacao. Full stop. The island is on the migratory route of over 5000 birds, so we see lots of wonderful looking birds, often for just a short time.

We have an indigenous hawk called the cara cara which is a pretty big predator around here. We’ve seen it take out some of the local cats even!

But my bird news is getting an eagle on the par 5 hole number 17 at our Blue Bay golf course. It’s one of the longest holes on the course so a good drive is important. I hit a nice ball, right in the center of the fairway, and it rolled nicely to within 175 yards.

I took my hybrid 4 wood and put it nicely on the green. The putt was 14ish feet or so? But I put it straight down the middle. Pretty thrilled with that! 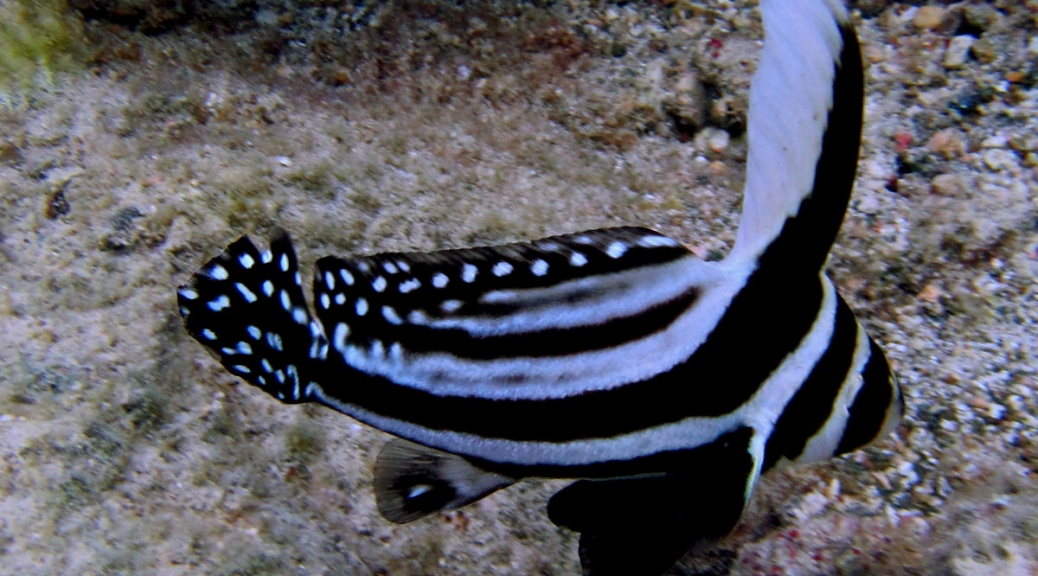 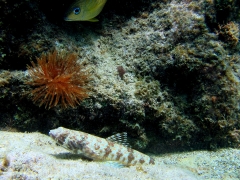 It was a bit cool, but we quickly adjusted to the temperature. One thing about the ocean, there are pockets that feel much warmer, so you want to spend a few extra minutes there!

The visibility was quite good, excellent in fact. We saw what we’ve come to call the “usual suspects.” One thing that was kind of interesting was seeing two octopuses. Not often we see two here in our little protected bay.

It was nice to get back in the ocean, and I can bet we’ll be back in much sooner than the last time! 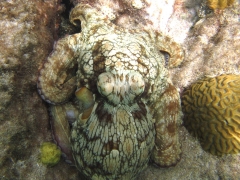 For St. Patrick’s day here at Blue Bay, Katherine, who was our real estate agent, organized a party on the beach. There was lots of green beer, potato races, wild green costumes, and of course lots of Guinness! 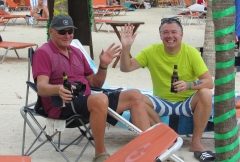 Lots of people came for the fun and games, and stayed for the beer and camaraderie. It was a good time. On the left you see Alan and Neil. Alan is from Calgary, but lives here full time. Neil is from Toronto but he and his family live here full time as well. 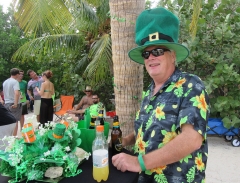 I’m pretty sure I had the best hat though! Not often you see such a large leprechaun. 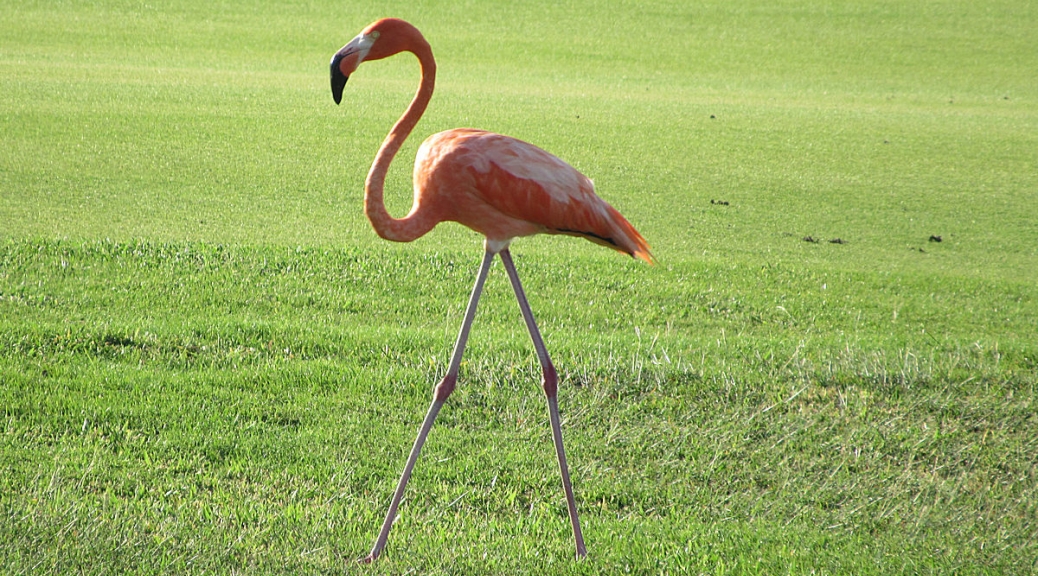 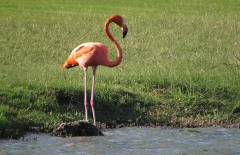 We have lots of water features around our property, mostly associated with the golf course. There has been a large community of flamingos that spend their days at the water feature that separates the first and eighteenth fairways.

But, they all left. We have not seen any for a long time. There is a salt flat just a short distance away, towards Kokomo Beach, where lots of flamingos can be seen virtually any day.

Well, today we saw one back on Blue Bay! It’s been a while, so it’s good to see them start to come back. Hopefully it won’t be just the one, and more will come back.

Oh, and Happy New Year! The fireworks were crazy here again this year. Went on pretty much all night. The whole island lights up, and it’s crazy noisy. Poor Bailey. She pretty much spends the night in the shower – it’s farthest she can get from the noise! 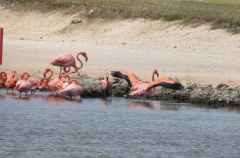 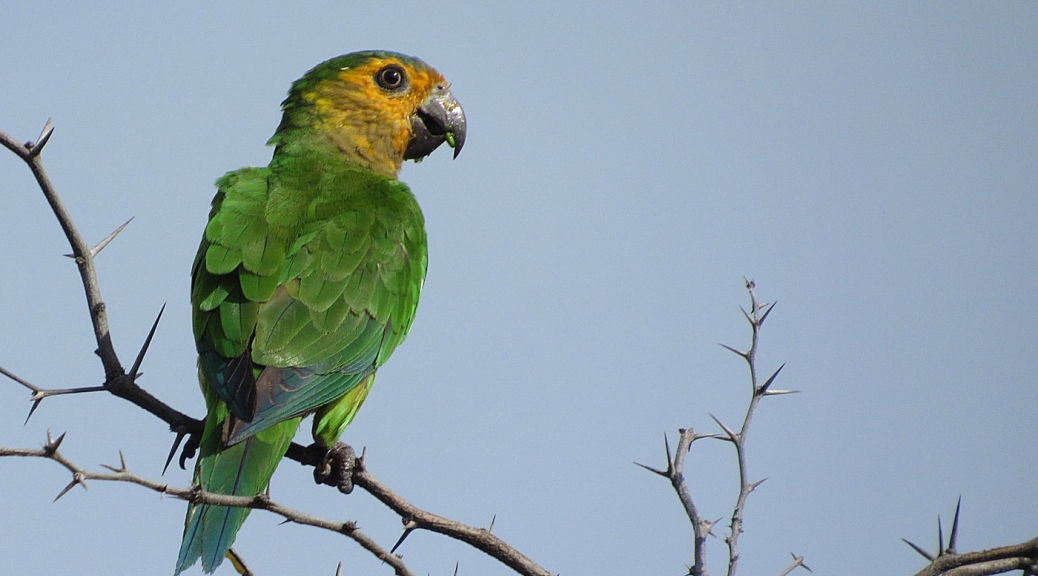 Pam has been taking lots of pictures on the golf course lately, mainly because I’ve been out playing every other day! There are just tons of birds around here, and she got a couple nice ones in the last couple of days. To the right is a southern lapwing. We see this bird quite a bit. Around the 17th hole there is a one with three little babies. Very cute.

The lora parrots are a brilliant green (the bird in the featured picture at the top of the message) and Blue Bay has a lot of them around. Pam calls them squawkers because they noisily call to each other. The movie at the end of the post has a nice little clip of these two in a playful mood.

I like this shot of a snowy egret giving himself a shake. He looks like he just got out of bed after a rough night!

The clip also has a bit of Bailey in it – she has made several doggie friends on the resort, and the whippet named Ollie has become her favorite playmate. When we get near the golf course, she is constantly looking for him. The second she does, she’s gone like a shot after him! 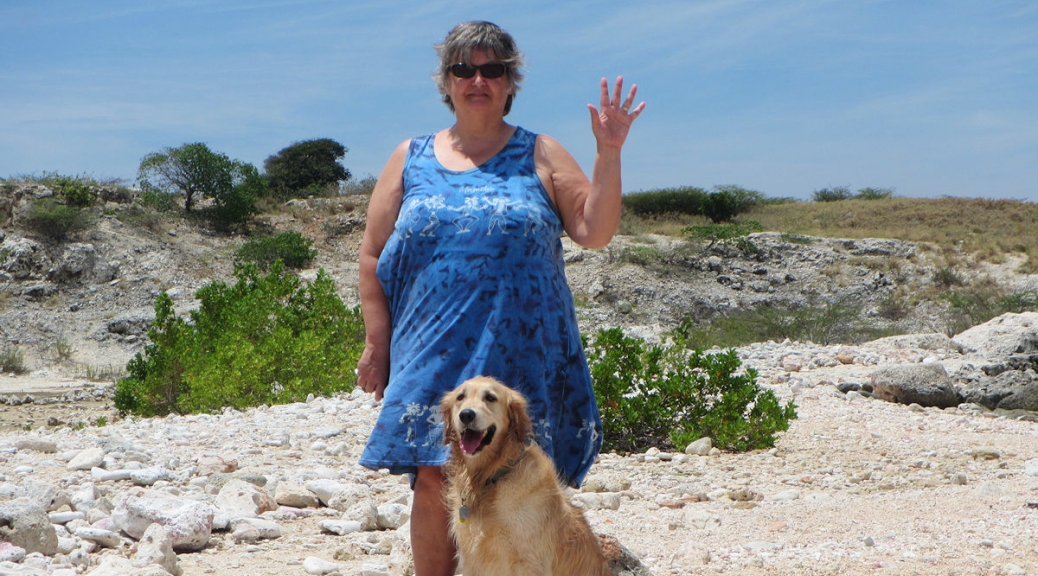 We have been doing all those things one needs to do when they have moved into a new apartment. Namely renovations, including expanding the size of our suite by stealing space from our patio. Our patio is 18 feet x 12 feet, and we’re going to convert about half of that to inside space.

We decided that we wanted a second air conditioner added, so that any guests will have air conditioning – quite important at night. Makes sleeping so much easier. During the day, you live outside, eating, drinking, playing. It’s always warm, sunny, and breezy.

Construction on the new doors should start next week. We had an architect (Henk Bolivar) come in and examine the place, and he suggested that we don’t install an additional set of doors, but move the current set out to the new location.

Adding the new airco is a complicated process, with the compressors stored in a room near the front of the apartment building, while the control unit needs a place to discharge water. In order to add an additional unit into the apartment, we would have to go through another apartment – something that they could reject outright of course – and that could potentially add months to the process. Instead we have devised a plan to add the unit through the new construction! The result is that the entire renovation will solve all the problems, and look completely seamless and built in, rather than some jury-rigged add-on.

Henk, the architect, was one of the nicest fellows I’ve ever met. Jovial, forthright and funny, he couldn’t be a better fellow to work with. He kept saying, “Look, as an architect, we want things to be perfect as possible for the owner.” The idea we had had to add the second set of doors he described as a nightmare, and something we would not like. We were very pleased and surprised when he said just do it the right way first. Don’t settle for something – get what you want, and have it done right by professionals!

Everyone we have met on this island have just been great people. When they discover we are here to live, rather than just winter here, they are so excited! Welcome welcome welcome has been their response!

We’re becoming more and more comfortable here. Believe it or not, Bailey has made the transition easier. People are just completely charmed by her. A lot of Curacaon dogs are guard dogs, and are not friendly. Bailey of course, is a charmer. All the staff all ready know her name. When they see me without her, they wonder where she is, is she sick? They bring her a bucket of water with ice cubes in it! And she loves the attention they lavish on her.

There is an off leash beach here on the resort and we’ve jumped in the ocean a couple of times with her. She’s great with it, but a bigger wave spooks her and she gets out of the water. She always wants to drink from the ocean! The first time she did, it was a big mouthful that made her start coughing. She still takes a taste, but much smaller now. Her favorite activity is chasing the geckos – not much luck for her there tho. There are a number of cats on the resort and she tries to give chase, but they don’t run.

She prefers to lay outside in the sun rather than inside in the air conditioning. We were worried she wouldn’t like the constant heat (every day is around 33-35 C) but she loves it. The other big thing with her are the birds – there are so many large birds here. She literally stops in her tracks to follow the flight of a pelican or heron or flamingo.

Here is a brief movie of a pair of green moray eels – I realize we’ve uploaded a couple of moray videos already, but this one is quite cool. They are both sizable morays, with a slightly different color. I wonder if one might be female and the other male? I don’t know, but one was quite a bit bigger than the other – not so much longer, as it was thicker than the other. And watch how wide his mouth gets when he scarfs down that fish!