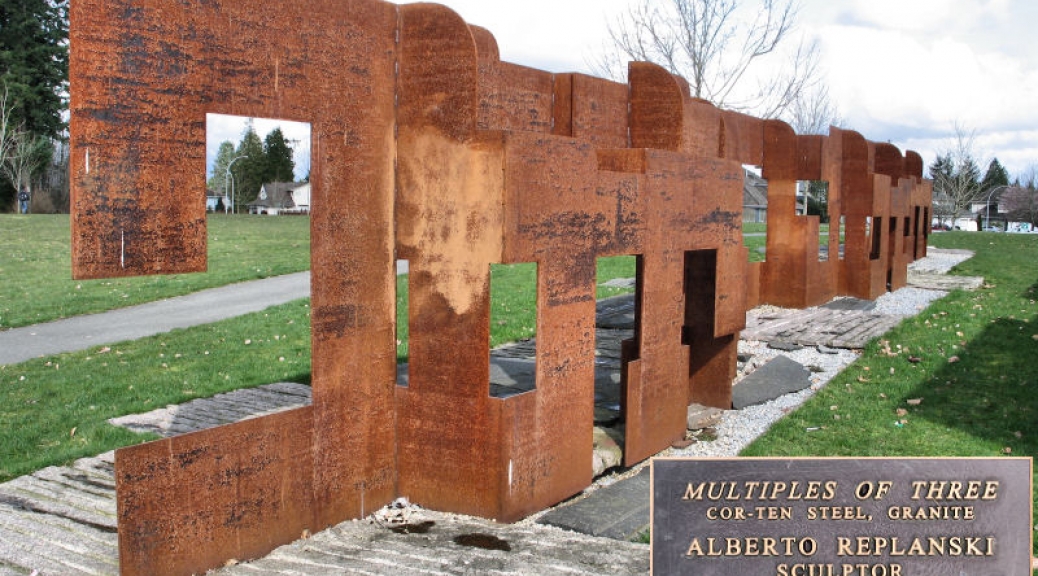 Today we explored three North Surrey parks, in the Fleetwood neighbourhood. The theme for our walk was public art, and each offered different experiences, in vastly different settings. The first park was called Meagan Ann Macdougal Park. There is a sculpture there called “Multiples of Three” a steel and granite sculpture of monumental size.

The sculptor is Alberto Replanski, and it was installed in July of 2002. It was pretty much a disappointment. The steel has rusted to a significant degree, and it really looked to me like an eyesore. The park itself is not much either. It is really just a small neighbourhood park that is not that well kept, has a rather small playset suitable for just few children, and the wooded area seems a mess. We had a pretty short stop there!

We then headed over to the Fleetwood Community Center which is ringed by lovely, well-kept grounds. There is a very new exercise circuit, designed for seniors, since there are quite a few seniors residences surrounding the area. There was an unsightly retaining wall, that students of local art colleges have made pretty with various hand made tiles, of fish, animals, plants, and portraits. There are also tiles with script, teaching you the history of the Fleetwood district.

It was there that we learned that the Fleetwood area is named for Arthur Thomas Fleetwood, a soldier who died in the Great War. He enlisted in 1915 and was quickly sent to the front. He was wounded, but returned to the battlefield  in May 1917. He was mortally wounded by a bayonet thrust in September 1917, age 39.

His sister refused to let his name die, however, even though he was “a common ordinary man.” She petitioned to have the community center named for him, and now the name Fleetwood adorns everything from pubs, to stores, schools, community centers, condo projects and car lots.

There is a life-size bronze of him, in uniform, with his kit bag at his feet, seated on a park bench. It is a very finely crafted piece, by the sculptor Nathan Scott. It was really quite moving to “see” him. A man of small stature, he seems to be waiting for his sister to arrive, to take him home. His hat rests on his leg, kit bag at his feet. He has a calm visage, patiently waiting. Really moving, and definitely worth a second look.

Next we tried a new way home and discovered a recent addition to the Surrey Parks and it is called Fleetwood Gardens. It’s a very large park, way bigger than we were able to explore in one afternoon. It has amazing facilities for children, with more play areas than any park we’ve been too. There are soccer fields, tennis courts, volleyball courts, softball diamonds, and just miles and miles of trails. 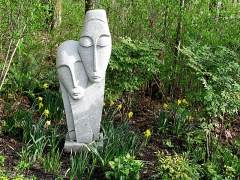 There were wonderful manicured flower gardens, well signed to let you know what is going on. As you stroll through the trails, there suddenly appear marvelous stone sculptures blending nicely with the landscaping. There were even stone slabs with poetry!

And the trails! Miles and miles of trails crossing over streams, lovely bridges, wonderful flowers everywhere. I can see that this park will be on my regular route! Max and I will be exploring it a lot as we train for the Sun Run.