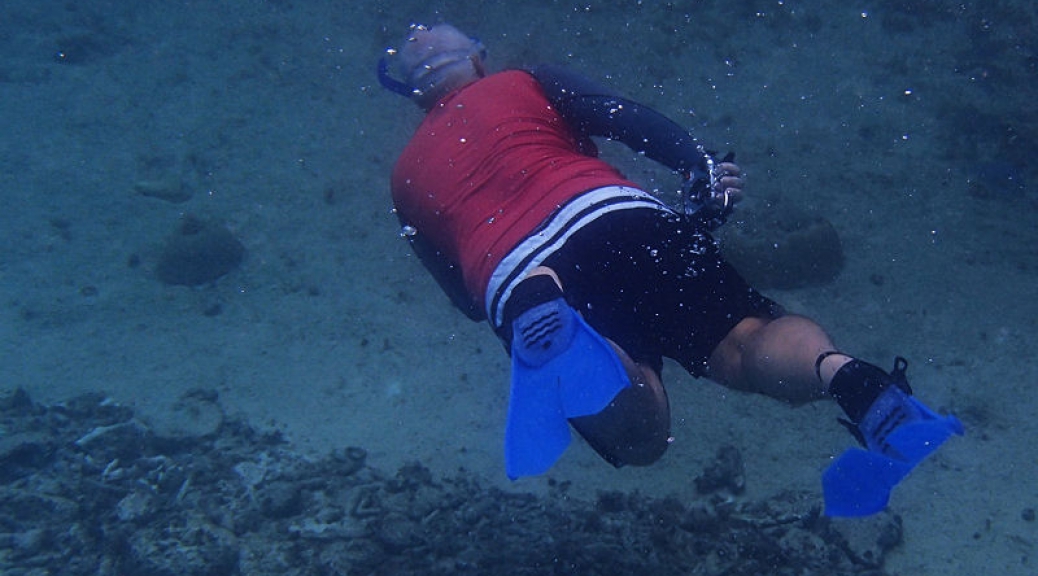 Today was a windy day, so we know that usually means the visibility for snorkeling is not very good, so we decided to check out one of the seven museums on Curacao. On the way we passed the famous floating market in the downtown area. They are actually boats, floating right on the water! 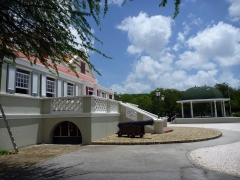 We settled on the Museum of Curacao, the oldest one on the island, housed in a former hospital for patients with yellow fever. We got bit by so many mosquitoes while touring this museum, I wondered if we got yellow fever! Wow – did we ever get bit!

There was a $5.50 charge to get in the museum, which consists of the large former hospital, a couple of out buildings, one housing the former mail plane,  one showing a former store, and one a slave quarters, as well as some nicely appointed grounds with many outdoor sculptures.

In the main building, there were a lot of paintings and sculptures, almost like an art gallery, rather than a museum. Some of the artwork was fairly modern, some 19th century. I was particularly struck by this self portrait of an artist named Edgar Fernhout, (died: 1974). The hands are so large and prominent. 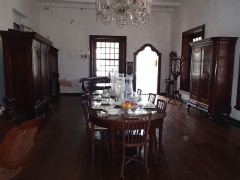 There were several rooms set up like mid 19th century plantation owners – one called the Mahogany room, pictured here. Mahogany is a popular wood in the tropics since it is termite resistant, a common pest here. 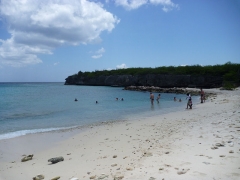 We then decided to head up to Daaibooi Beach, which we had never been to before. It had a smaller snack bar, dive shop, some facilities, some palapas, and lounge chairs. There was no charge to use the chairs or palapas. 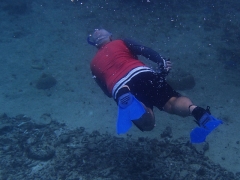 It’s a fairly small bay, quite protected from the ocean. There wasn’t a lot to see; the coral was pretty badly damaged. Further out, we saw more coral, but it was no where near as nice as Blue Bay. Still it was nice to get in the ocean for a swim.

For dinner we ate a nice meal at an Indonesian restaurant called Sambal, in the Zuckertuin Mall. The food was very nice, tasty and flavourful without being over-spiced. The young servers were very pleasant and helpful with our selections.

We started with an Indonesian egg roll, and a Suriname egg roll. They were ok, but I wouldn’t order them again, as it turned out the mains were very substantial.

I ordered a Nasi Goreng Rames which was served with two kinds of beef – a satay (skewer) with peanut sauce and a stewed beef – as well as a spiced chicken. There was a spicy chayote that was really good, half of a boiled egg with a spicy chutney, and some plantains and rice. It was certainly a very big plate of food!

Pam’s dish was similar, except that noodles replaced the rice. With two diet cokes and two beers, the bill was $60. Not bad really. We both agreed we’d go there again.

Dogs are lousy poker players. When they get a good hand they wag their tails!