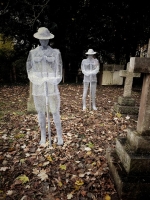 Today is the 100th anniversary of the signing of the armistice between the Allied powers and Germany that ended the hostilities that has become known as the First World War. There have been a number of ceremonies honoring those soldiers who fought and died in the “Great War” on this momentous anniversary. One that really caught my eye was by the artist Jackie Lantelli. She felt that something special was needed to honor those soldiers from her small village that went off to war. 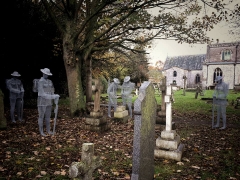 Ms. Lantelli said that she has always been “passionate about remembering on Remembrance Day” but this year she wanted to do something special. There were 11 soldiers who lost their lives from their little village and she has sculpted all eleven men in chicken wire statues. The result is ghostly, moving and emotional.

I think they are quite haunting and deserve a tribute here on this blog. I find the two soldiers together, seeming to console one another to especially poignant. It’s a time of year that is important to Canadians, but especially to those of us who have family members who were soldiers.

(I have uploaded several other pictures – check out this url to see them.)