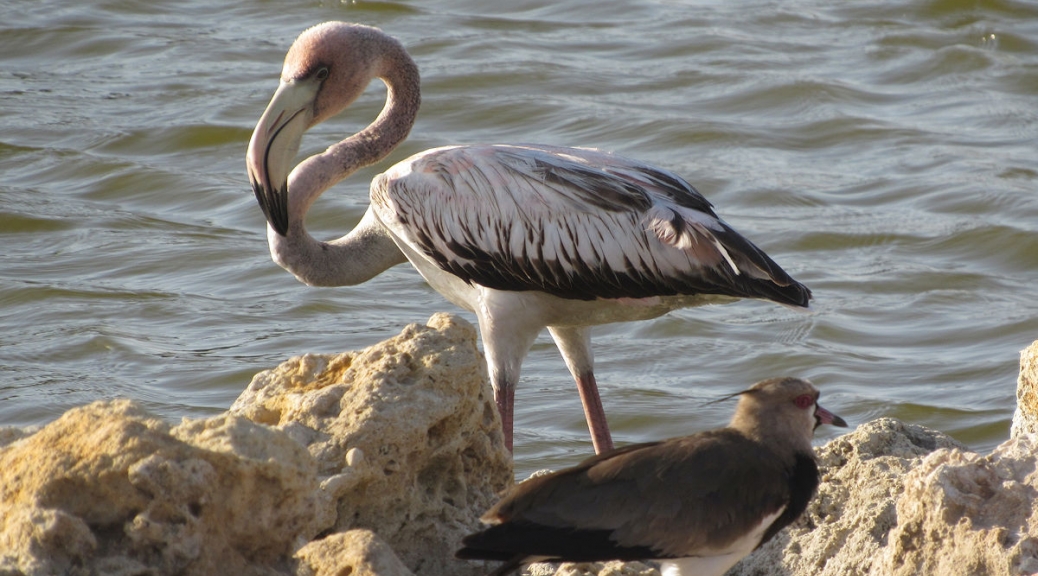 Pam and I are on the golf course at least once a week. She takes the camera and has taken some great shots of me playing, and of the birds that make the golf course their home.

I’ve said it before, but there are around five thousand different bird species that spend some time on Curacao. Local species include parrots, flamingo and the predator falcon called the cara cara.

Some birds are here for just a few weeks. They use the island as a way station as they fly their migration routes.

Lots of color, lots of sounds, lots of fun. 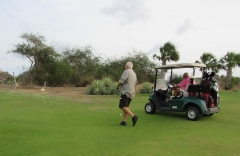 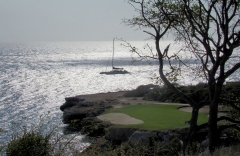 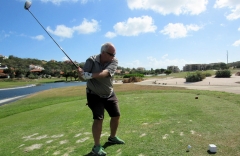 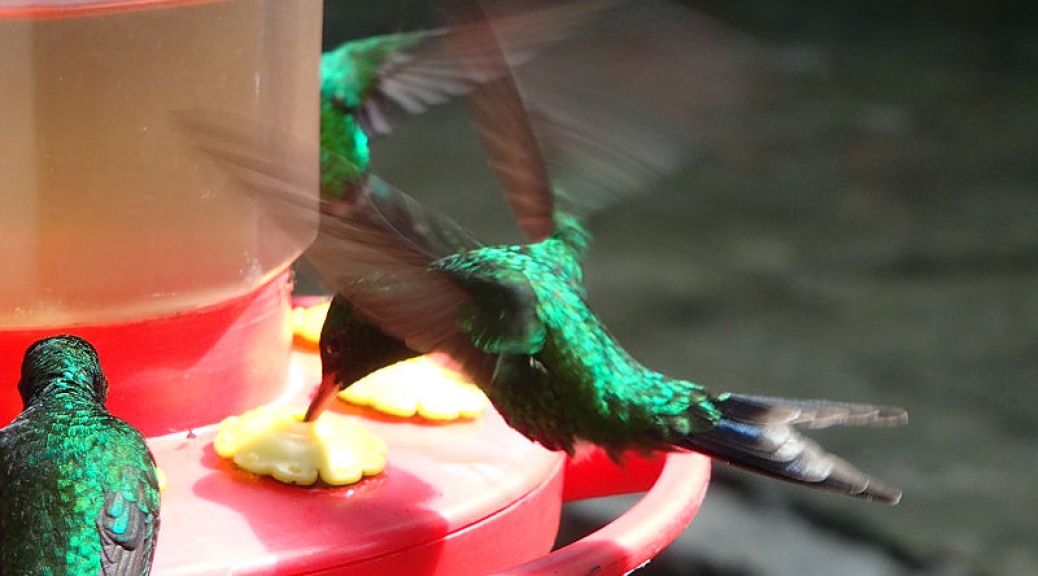 Ever since we decided to come to Roatan, Pam has wanted to go to Gumbalimba Park. It’s an animal sanctuary, filled with monkeys, iguanas, parrots, macaws, and especially hummingbirds!

It’s near the West End, in a lovely setting on fifteen acres of lush jungle with ocean frontage, a swimming pool, restaurant and tons of trails to explore. To start your tour, there’s a “pirate cave” to explore, with bats hanging around. 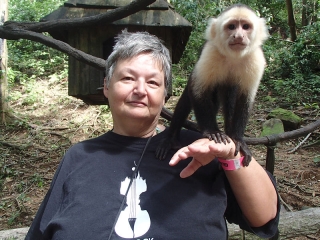 But, the monkeys are the main draw of course, and they just love to interact with people. They are very curious, and cute, and silly and well, they are little monkeys!

As soon as the golf cart arrives, the monkeys sneak on and steal anything not tied down, including water and pop bottles. They’ll take the keys right out of your pocket! 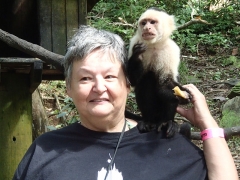 They come around and sit on your shoulder, wrap their tail around your neck and settle down for a snack – or until another monkey figures he deserves the seat. Not sure what startled Pam and this monkey, but pretty cute shot. 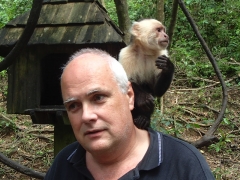 I was quite surprised how soft their feet and hands were. I expected they had some sort of claw, or nail to help grip, but they are so soft and gentle. It was really a lot of fun to hang around with them. 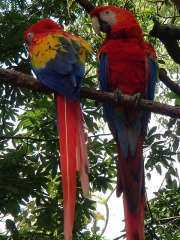 There were some of the largest parrots and macaws we’ve ever seen. Oh my – so colorful! They are essentially free in the park, although they have large cages for their protection during the night. While we were making silly with the monkeys a couple of big beauties just sat on a branch and watched us. 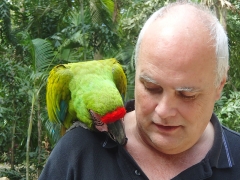 The big emerald macaw loves to sit on your shoulder, and patiently lets you take as many pictures or movies as you like. BUT watch out for your buttons! He loves ’em! And he ate the top bottom off my golf shirt.

We saw lots of different lizards, geckos and iguanas. They have close to twenty different types. One that was quite startling was four or five feet long, but in the color of a tiger! Quite the unique beast. 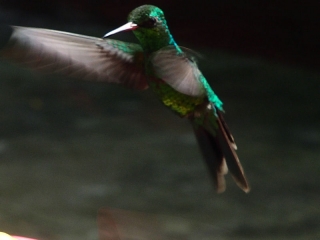 We finished our little tour with the hummingbirds. We’ve seen them around our resort, and had trouble getting a picture or movie of them. Well, that all changed today. Who knew there were this many hummingbirds in the world, let alone one place!

The beach is nice, but needed to be cleaned from the storms of the last couple of days. The water is quite churned up, and it has been tossing lots of seaweed on the shores. Still, Gumbalimba Park is a great way to spend a day with some silly monkeys!

Coming home, we saw a family out for a drive. On a scooter. All three of them. Yep, three of ’em! Not too many rules and regulations on these roads! hehe 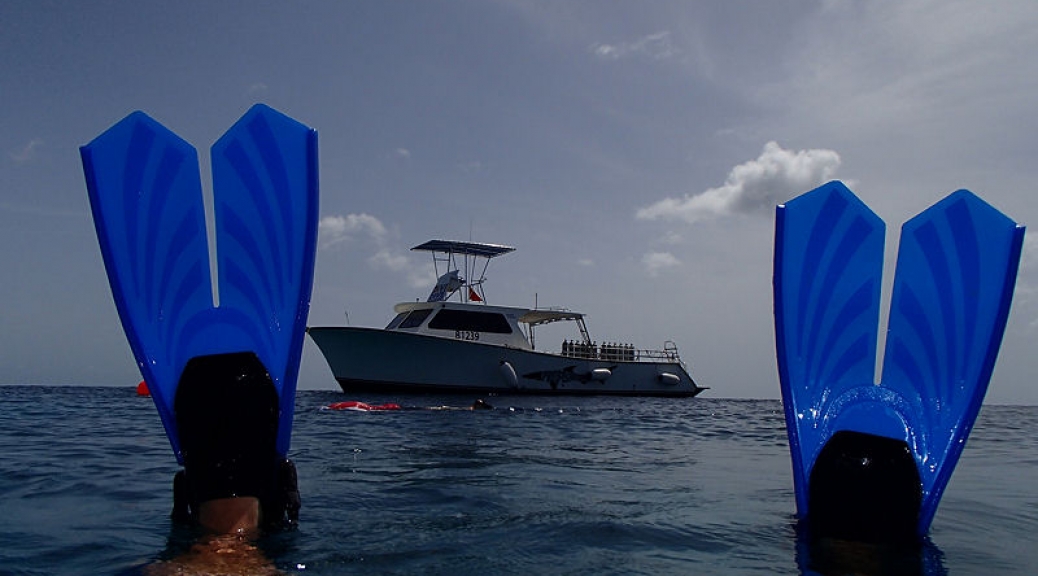 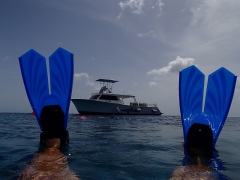 Not much done today. We had a lazy day around the resort. Dove in the ocean and paddled around out front of our room. That is a great thing about the resort – the walk to the beach is about fifteen seconds, and the only traffic you need to avoid is the stampede of people rushing to pet the cat!

We decided to eat out for dinner and decided on the Ribs Factory. On Curacao, the Ribs Factory is one of our favorite places to go. The one here on Bonaire is not connected with it, but we had to give it a go. It’s right on the downtown Boardwalk, up on the second floor. It’s a rickety walk up those steep steps, but the food was worth it! 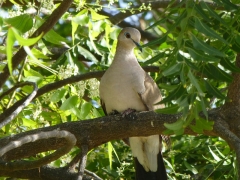 The ribs were very good, served with salad, fries or a baked potato. And the view was tremendous. The sun set as we dined. It’s not a glamorous place, kind of reminds you of a Senor Frog’s type of place. Prices were ok, about twenty dollars for a full rack, (Pam’s choice) and the same for a half rack/chicken combo (my choice).

Service was good, although the waitress was a little shy. Total bill was 49 bucks, with a beer and a pop. Pretty cheap deal.

While driving downtown we saw this sandwich board sign up… if you can figure out what is not open, please let us know!

Here is a short video of a couple of birds of Bonaire. A Lora Parrot and a warbler, much like you’d see in North American cities.

Who kicks a dog kicks his own soul towards hell.