In the last little while, the card game of bridge has been hit by cheating scandal after cheating scandal featuring top players illegally signalling to their partners via hand and card placement signals. All bridge organizations have as their strictest taboo the idea that partners would cheat to give count or strength signals.

Well, after the recent Spingold tournament, a tournament played at what is called the North American Bridge Championships (NABC) a high ranking player who lost, Boye Brogeland, claimed that the victors, the Jimmy Cayne team, had employed a cheating pair, and he was going to publish proof!

He admitted that he had only done so because he lost, and had he won, he probably would not have said anything. However, he lost and here we are.

This first video is a clear showing of how the cheating pair, who turned out to be the Israeli pair of Lotan Fischer (a player reprimanded by the Israeli NBO for cheating, previously) and Ron Schwartz, signal strength and lead preferences to their partner.

It is a breathtakingly simple scheme. The videos are from the recent Euro bridge championships to decide entry into the World Championships (the so-called Bermuda Bowl.) An intrepid Dutch scientist watched the final and discovered the the other pair in the finals was also exchanging signals!

Suddenly, a top German pair, Alex Smirnov and Josef Piekarek announce that in the recently completed trials in which their team qualified for entry into the World Championships, they had committed “unethical behaviour” which meant that they would be forced to withdraw from the championships.

In the spirit of cleaning the game, and removing the stench of cheats, the national organizations of Germany, Israel, and Monaco withdrew their teams from the world championships.

Devastating. But not over.

During the lead into the World Championships, the WBF withdrew the sanctioning for a top pair from Poland. The WBF, operating in a Star Chamber-like dimension refused to say why the sanctioning had been withdrawn, but did not deny it could be for cheating.

With a win at all cost attitude, the Polish team refused to withdraw. They obviously did not see things the way Germany, Israel and Monaco did. To the shame of all bridge organizations world wide, and as an insult to every player who ever paid dues to a national bridge organization, the Poles were allowed to compete and to win this tourney.

Now, video evidence of the Polish pair shows without a doubt they used signals to get to the Bermuda Bowl, and the Poles should not have been allowed to play.

As an average player, someone who would never have the chance to represent their country at any level, suddenly the players we seek to emulate, are out and out cheaters. They aren’t playing fair. It’s the bridge world’s equivalent of the steroid scandal in the major sports. Everybody is doing it, right? If Fisher-Schwartz claimed they had to cheat because others are, well, they wouldn’t be wrong would they?

So where do we go from here? The WBF seems to be a parody of a world wide organization and the NBOs seem unable or unwilling to clean up their games. Even sponsors have to accept some of the blame since they hire these dirty pros.

I’m not even sure why I’m posting this…. 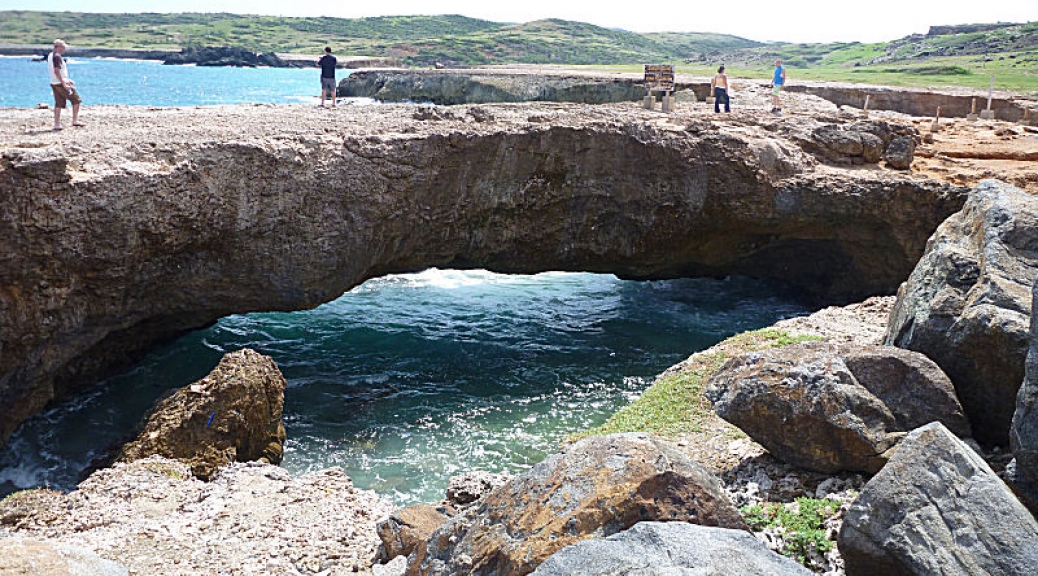 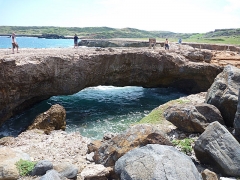 We spent today driving around parts of Aruba we had not seen before. We want to see the Alto Vista chapel, which is the oldest, and smallest church in Aruba, but we didn’t find it. Instead we stumbled on the Natural Bridge, a rock formation carved out of the native stone by the crashing of the waves.

Here’s a movie of the natural bridge, just to give you an idea of how rugged that side of the island is… 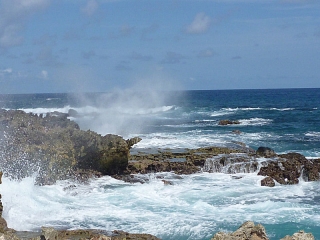 It’s in an area that has rather poor roads! Almost as bad as the roads that lead to Friar’s Bay on St. Marten. They were rough, full of potholes and mud and were quite a fun ride. Pam didn’t think they were that fun! She kept her eyes closed, and her hands on the safety belts! 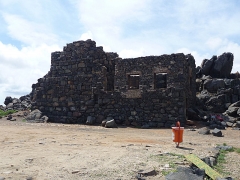 We saw an old abandoned gold mine, basically on the same road as the natural bridge. It’s a rugged part of the island, that’s for sure.

We didn’t get in to snorkel, because I forgot to put on the sun screen and got quite a bad burn yesterday. Hopefully tomorrow we’ll be back in the water. We did drop by Arashi today and the waves are very calm, and there were some snorkelers in checking out the fish. We expect by tomorrow all will be back to normal. 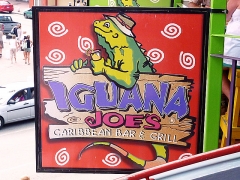 We stopped at Iguana Joe’s Bar and Grill for their famous keshi yena, a local favorite. It’s made with chicken and currants and spices dumped into a hollowed out gouda cheese round and baked. Delicious! 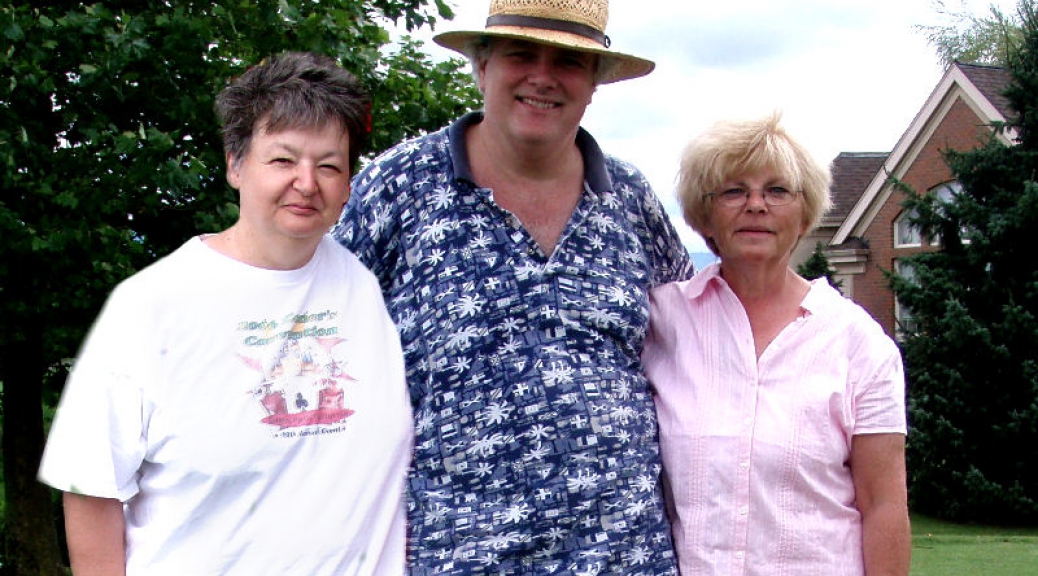 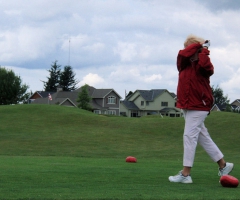 This summer our good friend Joy flew out from her home in Ohio to stay a couple weeks with us. We had a great time, even though the weather pretty much sucked. 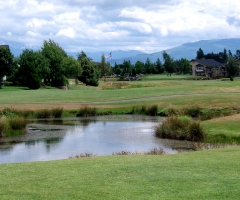 It was just like old times. We originally met over the internet while playing bridge. We met in person at one of the conventions in 1998. Over the years we’ve traveled to each other’s homes and stayed in touch, even though we’re thousands of miles apart. 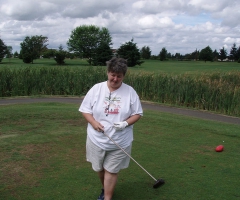 We spent a couple of days down in our time share in Linden, Washington. It’s a pretty little town just across the border from us. We can get there in well under an hour, if the border crossings cooperate. 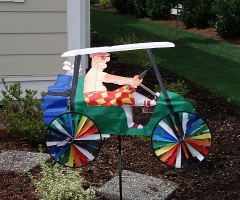 It has a really challenging links-style golf course there. You need to know your game well, as there is a lot of water, and you need to know how far you will hit with your club, or you’re in it! It was one tough course.

There are some lovely homes around the course, naturally, but the little golf cart wind sock is hysterical.

Another place had an old golf bag as a planter. Cute too. 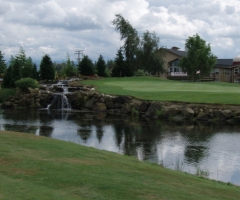 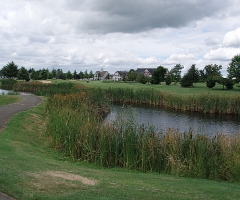 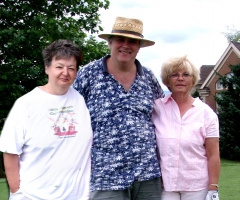 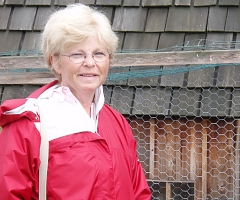 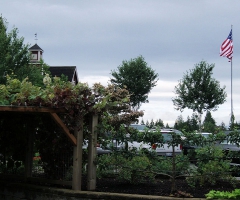 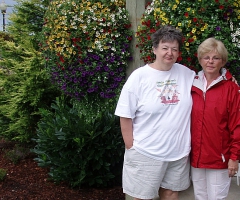 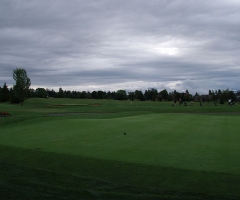 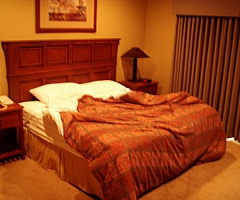 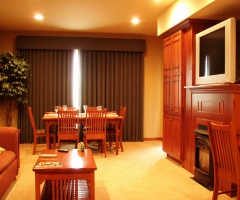 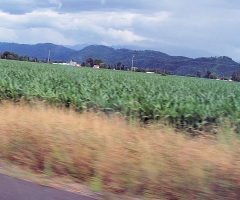 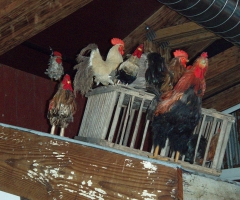 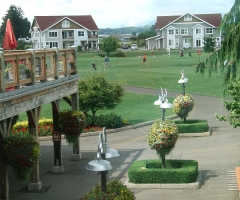 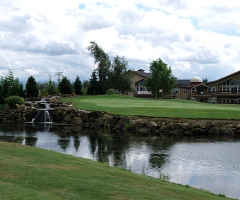 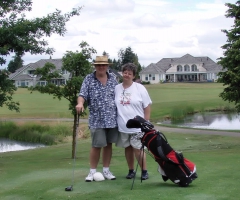 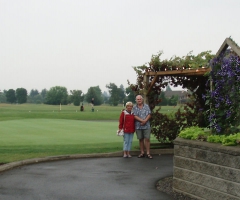 No man can be condemned for owning a dog. As long as he has a dog, he has a friend; and the poorer he gets, the better friend he has.